Welcome to the next edition of ‘This girl can run and she does so reasonably well’ Okay, it’s a working title.

Bury 10k. It was cool. I lived in Bury for what seems like umpteen years but was actually 21 and I love it, which not many people say about it. I hate black pudding (cue all my Bury fans disappearing) but it has its qualities. The indoor market where I’d get my school shoes and the sweets from ‘Goslings’ – which have all changed now and are run of the mill sweets. Boring!

Ok blah blah blah, I love Bury, so when I got offered the chance to run a 10k round Bury in the freezing cold on a Sunday morning, I naturally jumped at the chance. Who wouldn’t?! **Most people, most people would think of a lie-in or a cup of tea whilst watching something on the TV.**

I’d known I was doing it for a few months and as it was the week after Salford, I knew I’d be ok doing it. Doing Salford last week and getting such a good run, I was raring to go on Sunday. I’d decided to meet up with running club near the start line and there was some excitement on the Tuesday at running club. I was hoping to run with some of the members, it was to be my first time in club colours; a fact that I told literally EVERYONE WHO WOULD LISTEN. Sorry if that was you, but I was excited!

After a busy Friday night and Saturday with family, I could really have done without the 10k starting at 9am! 9am!! I’m barely awake then and I have a 2 year old who has no concept of time or lie-ins. I drove into the town centre, waved him and little one off and headed to the meeting point. As usual, I was so stupidly early and I dropped my bag off pretty much straight away so I was just wandering around, freezing cold waiting for it to get busier and for club members to arrive. Slowly, the numbers started trickling in, the group that had been doing a training course ‘5k to 10k’ were there, looking nervous but mostly keen and there were plenty of our members about to give them encouraging words and offer little bits of advice.

I knew I’d got support on this one in the form of the fantastic cheer squad that were set up around the 8km mark, I thought that if I could just get to there, I could do the last 2K on their cheers and support alone. My legs would power through.

Soon, the time came to start lining up and get into position for the warm-up. These are difficult to do when packed into a confined space with thousands of other runners but we all gave it a go and hopping up and down for warmth; we all waited for the countdown……..3, 2, 1, GO!!! The crowd slowly moved forward until we could move from a slow shuffle, to a walk, to a slight jog to a run. At last, over the line and I was away. I’d lined up near the 60 minute pacer but soon lost her in the crowd and spent the first KM battling my way through to try and catch her and boy, am I glad I did. I got to her about 1.5KM in, I asked her if she was happy if I stuck with her and we struck up a conversation. We lost a few of the pack and gained people here and there but it was pretty much us two sticking together. I’m so glad she was the pacer, she was lovely and so helpful, she knew that there was a hill to climb back at 9km so we did the downhill bits slightly faster to make sure we had extra seconds to do the hill. She was friendly and chatty and I wish I’d got her name!

By 5K, i was ready to give up, I’d broken my PB’s for a KM, 1/2 Mile, Mile, and 5K and I was tired. My legs ached and I wanted to give in, but the pacer and sheer determination kept me going. I was really hoping I wouldn’t have to walk, I’d strapped my knee up and running with someone is always a deterrent for my stopping. I barely remember much between 5 and 8KM. I have no idea of the route and we kept saying ‘I know where we are, oh wait, no I don’t’ until we got to 8KM. I heard the cheer squad before I saw them; cowbells, shouts, cheers, the lot. It was awesome! I needed that right at that moment, I took their cheers and I literally ran with them. I didn’t want to feel like I’d let anyone down on my first run and so with that in mind, we sped up a bit.

The hill was nothing to write home about, it was a hill, slight but long but to our running club; it’s nothing. I knew we weren’t far away and the pacer told me she’d make me leave her with 250 metres to go so I could get my sprint finish. I didn’t think I had anything left in me but sure enough at the marker, I pushed on and sprinted ahead, dodging round people (sorry if it was you) and aiming to get in under that hour mark. I remember seeing the clock to the right of me and being disheartened as it showed 1:00.17. I always forget that’s the gun time! I crossed the line, turned round to see the pacer and shout my actual time according to Strava at her and she smiled, congratulated me and disappeared. I collected my finisher’s bag and found some of the ladies from the club. We swapped times and congratulations and exclamations about how well we all did and that we’d finished and then I properly looked at my time. 58:58. I’d done it, I’d got under the hour mark by a minute. I wouldn’t have done it without the support I had on the day and leading up to it if I’m honest. I was so pleased (so pleased, I’m getting emotional writing about it)

I don’t think I’ll forget this 10K for a long time, weirdly a lot of happy memories made and it’s my home town! I’m hoping to do it again next year, let’s see what times I’ll be doing by then. 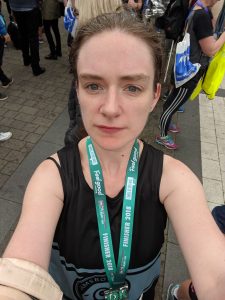