Home Running Bury 10K – PB thanks to my sister!
Running

Bury 10k, my hometown race. One that is very close to my heart for another reason. It’s the first race I ran in club colours and it’s where for the first time, I had the Ram welcome home.

This time, not only did I have those wonderful RRC guys, but I had the big sis (gazelle to you and me) and she jokingly said ‘If you want a PB, I’ll run with you.’ Oh how I laughed, until I realised she was serious. Shit. She’s much faster than me and I know what she’s like in a race. Ok, we can run this one together. My aim was sub 57 minutes. Easy, she said or words to that effect as I tried not to throw up or pee myself.

The start line was packed, there was a sort of warm up but no-body could hear it and therefore I paid no attention. Why do I not warm up? Still not learnt my lesson (wait for the half marathon blog). Then we were off, flying round Bury, past the parish church and down past the bars where I went underage and past my one of my favourite places; the library. Down the road, and then all of a sudden, much earlier than normal actually, the whining happened. Lord knows how my sister put up with me, but she did as she’s a bloody saint. She cajoled, reasoned, bribed, talked at me but never shouted. Bloody love her. This race is my big bug bear of the 10km’s because I always want to do well. I’m also sure that we cut a massive chunk out of last years course but never mind. There were a few rams on course dotted about but I knew there would be some supporting at around 8k. I could make it to 8k. I was at 4k when I realised that I had no lungs left. Or legs. Or feet. Or any feeling in my body. everything was screaming at me to slow down, it was by far the fastest I’ve ever ran and I nearly cried when she said we had to just keep going. I needed water so at 5k, my lovely sister got me water and held on to it in case I needed it later. She grabbed sweets off a passer by – they were handing them out, she didn’t just steal them from someone – and saved them for me as well.

At one point, she kindly told me that if I wanted to do a sub two hour half marathon, this was the pace I needed to run at. I think I swore at her. At 7.5k, I was done. I had to walk, and she obliged. The 55 minute pacer passed us, checking in on us – he was lovely too – and then off he went, singing and chanting with his group behind him. We started running when I could hear cowbells. I couldn’t let the club see me walk so I set off again, getting closer I could see my friends, I always cry when I see people I know in a race. I cry at anything in a race but I’m pretty sure if I hadn’t had Carolyn there, I’d have collapsed on my other running inspiration and never got up. Instead, we had a hug and on we ran. Nearly there, so close!

The hill. The ruddy awful hill up Manchester road back into Bury. I hated walking up it as a school kid – I despise running up it! Carolyn was there, just ahead of me, making sure I was with her but just far enough in front, I had to run to talk to her. The top of the hill reached, it’s flat back into Bury, the way we left it. The crowds get thicker here as well so I felt a bit better, knowing I was nearly there.

Then it happened, well three things happened. I heard cowbells again. Hmm, wasn’t sure who it would be and then I heard the best cheerleader in the land shout my name. Well that was that, tears fell as I saw my friends but I was so close, I just kept running, smiling and waving as I went past them. Then, as I was about to cross the line, I heard my name again, and Carolyn’s – our big sister had turned up to see us finish! I have never had s non-running member of the family see me finish a race so that set me off again. Luckily, I crossed the line and no more surprises. Well just one. A PB!!! Not just any PB, two minutes knocked off my time! I ran Bury 10KM in 55:45 – all thanks to Carolyn. She is a running hero.

We walked through collecting medal and goody bag with t-shirt in (Wiggle, take note) and met our sister on the other side, sweaty hugs abound and a weird interview with someone with a camera and microphone – to this day, I have no idea who interviewed us. To be honest, it wouldn’t have been aired if it was legitimate, as I was all over the place and had to really concentrate to not swear!

So Bury and Salford done! Two PB’s, two races. Next up – Burnley Fire 10km. Hills, hills, hills with a few firemen thrown in for good measure. 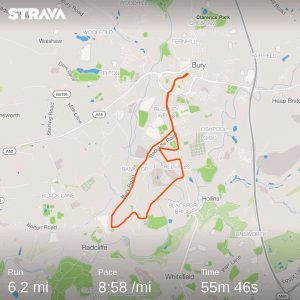