I often start my blogs by writing the title at the top of the page and then streaming off all the words before a quick edit and proof read and post!

Today though, I couldn’t think of a suitable title. Not sure why, as the topic is of course, running and so something I’m used to talking and writing about. I’m just feeling in a bit of a funk and needed to write more (I’ve just written a draft piece for something else) so I’m here to talk about racing!

I’ve not had a race for a while. I’ve not written about racing for a while either so this seems strange and new and yet comforting and old all at the same time.

September is my busiest running month all year – everything just happens at once! I’ve got three races in September; Salford 10K, Bury 10K and Burnley Fire 10K. 3 races in 3 weeks, I love a challenge so what better way to do it then to do 3 x 10K’s in one month whilst training for a half marathon in October!

Salford 10K took place on the 8th September 2019. It’s a race I did last year where my lovely friends at Swinton Running Club proudly took me under their wing and let me join their gang as we waited around.

This year, once again I’d be pretty much a lone ram – other than the lovely Jen who kindly gave me a lift there. The weather conditions were cold but otherwise perfect for running. I knew it would only get warmer as the race went on, club vest was the way forward. I do need to buy a club race t-shirt but never mind!

It surprised me that it seemed much more organised this year. Although last year, I got a lift in with Craig who then took my bag with him and I didn’t need the loo! Lots of places were already open for toilets and the bag drop queue, although humongous to begin with, moved relatively quickly.

Bags dropped, loo stop used and I found myself gravitating towards a group of people with red and white vests on. Swinton were back in full force, no big sister this time as she was swanning off on holiday but the usual rabble were there and as usual, I just kind of slotted in.

Starting the race with two very good friends, I thought I’d take it slow. This was only the first of 4 10km’s in as many weeks so I should build up the pace. By mile 2 I was on my own, oops sorry Colemans! I felt really good to begin with, my pace was good and the conditions were fine. Then, the inevitable doubts started creeping in; you can’t do this, why are you running, you look like an idiot, no-one even cares you’re here. And finally, you won’t get a PB anyway so what’s the point? Now, PB’s are my lifeblood during a race; I know, I know it’s finish lines not finish times but this year I’ve done so well to beat a fair few PB’s and I feel I always taper off at the end of the year as I don’t train enough in summer. Anyway, the time to beat for Salford was 1:02 – not a bad time, but not my quickest. The fake hills are the worst in Salford, they’re not quite hills but it’s not flat. The absence of crowds also makes me run a bit slower as I often rely on that motivation.

Doing Salford 10k again this year, and it being the 1st of 3 races that I had unfinished business with from last year was actually really good for my self-confidence and my own running health. I loved it last year, I got a massive PB and felt amazing. This year, the course had changed slightly and I didn’t enjoy it as much.

I also weirdly missed being screamed at by a bunch of nutters who had finished before me! The final two miles nearly did me in, my knee was hurting, my head was in a right mess and I knew then I wouldn’t get a PB. I wasn’t even on for a course PB! I had a little walk and talked to myself. I seemed to do the trick and I absolutely nailed the last mile! I looked at the time and didn’t know what time I’d done it in as it was showing over an hour! Luckily, my watch had it down as 58:09 knocking off a whopping 4 minutes! I was so happy, I did a little dance after collecting my medal and walking back down to meet people after the bridge. I waited until the Colemans ran in and it was so lovely to be part of a moment with my second club. I was really glad I’d done it and proud of myself for actually trying. Even if it was only in the last mile.

On the way home, I realised I had to do this again next week for the Bury 10K! My hometown race, another PB chaser and the second race I had unfinished business with. 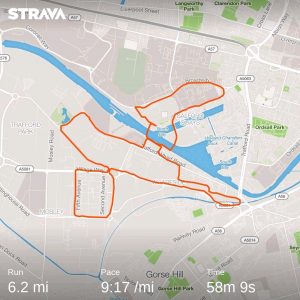