The third of the five races which nearly broke me was the Burnley Fire 10km. This was a club championship race so it was bound to be a good turnout for us, plus its a charity run with money raised for the Fire service so it was a win-win all round!

Well, until I woke up one very wet, windy morning – driving to get a lift from a friend and watching the rain lash it down did not make me feel confident about this race. It rained until we arrived pretty much! As I thought, there was a big crowd of RRC’ers and a few ‘normal’ runners milling about. The race started at the fire station so obviously, a fair few of the ladies turned into giggling schoolgirls (not naming anyone, but she is a good friend who decided I wasn’t allowed in her photo with firemen, I had to hold her coat instead! )

So after photos, a quick wee stop – fire stations are pretty cool buildings – the rain had stopped and we were ready to roll. Off we went, I started running with aforementioned friend but unfortunately as we were running up the first of many, many hills, I abandoned her (payback for the photo) and just went on my own. Standard Jackson running.

The elevation of this race was nuts! Below is the elevation profile for it, horrendous. I’m surprised I managed to get up any of the hills at all, my legs felt like lead for a lot of it, especially after pushing myself for the past two weeks. The hills slowly got worse. My legs were burning but I knew the worst thing I could do was stop. I walked up some of the worse hills until I got to the one in the photo; this isn’t even the worst hill. I’d just run up the worst hill to be told by the firemen marshalling that it was the last one. Liars. 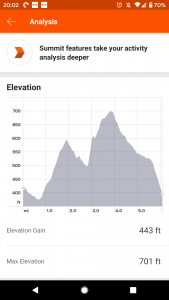 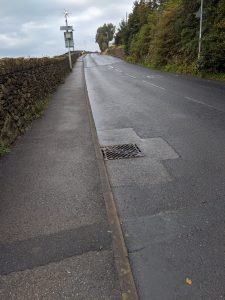 NOPE – not running up this bad boy.

It was one of the hilliest runs I’ve ever done, I may run for Ramsbottom Running Club and we apparently eat hills for breakfast but these were killer. I was grateful to get near the end and see a load of rams on a roundabout cheering us on. I love the feeling of having people cheering you on, makes me want to run that little bit faster! The cheer of the already-finished rams as I ran in was deafening. I love that. it makes me emotional every time. Finishing in a respectable hour and 3 minutes, I was happier to finish than most races I do! I also love how we wait until everyone’s home, running people in if they need a bit of extra support and cheering everyone on no matter if we know them or not!

A hard, hilly run with the added bonus of firemen every half mile or so. Great race! Would probably do it again but I’d need to get back on hill training so I could actually run up the hills!