We made it! The last race of the year!! I’m sure I’ve missed one out along the way but sod it, this is the last one.

I have, for the last two years, attempted and promptly failed at doing #AdventRun and Run Upto Christmas. The thing is, I love a challenge! I love to run (occasionally) and I love a medal. So I obviously needed to find a race to do during December, where I could wear Christmas leggings, a santa hat and hopefully bag a medal. Well, I didn’t buy any decent christmas leggings in time but I did find a race that gave me a santa hat, a medal and a selection box. OOOOHHHHHH I was in! Shame that it was the day after the RRC christmas do, but I booked it and on the day in question turned up to another muddy field. I had trail shoes in the car, did I put them on dear reader? No, did I balls. Completely forgot, which only bit me on the arse later.

Anyway…..So two of the runners in crime were there, Julia and Sam. We were one down due to a partner throwing up all night and no childcare. After registering, putting on the santa hat, then getting envious of everyone’s outfits; it was go time! Someone had kindly pointed out that as soon as we set off, we had to go up a MASSIVE HILL and not only that but the 10K was two laps of the route so we would do this MASSIVE HILL twice! Balls!

Setting off was fun, it was slippy, lots of runners, and I had forgotten to put my trail shoes on. FML. I thought I’d be ok, how muddy could it be? Very. Very bloody muddy and cold. There was mud everywhere! There was snow! 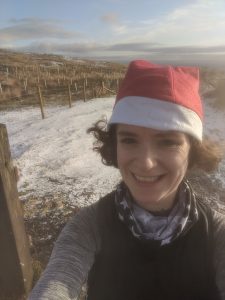 I slipped and slid round, often falling behind but as Sam sped off into the distance; Julia and I, once again, stuck together. We had a right laugh, especially as I nearly lost my shoes a few times! We nearly fell over, we took photos and I think a few people thought we were taking the mick a bit (I assure you, we weren’t but it’s easier when you laugh about nearly falling in mud up to your ankles). I did start to panic a bit as I had to get back to take Cal out and we’d been out a long time. We decided we had to get back within 1hr 30 minutes so started running a bit more and as it was the second time round, I knew where I was going and where I could place my very soggy feet. The last two miles or so are relatively mud free and quite flat or downhill so that helped us as well and as we sprinted up to the finish line at 1hr 26 minutes; I’ve never felt more proud! Yes, it is by far my longest time. Yes, it was hard and if i’d had trail shoes on, it would have been a lot easier. No, I don’t regret a thing about it.

Easily my absolute favourite run of all year. And there’s been some pretty decent ones in 2019. This outweighed every single one. I’m definitely doing it again.

And as both our club race calendar and Julia said ‘Never forget that a brief callout for a running buddy on a cold, wet Sunday morning can produce a flock of Rams to keep you company’. Absolutely spot on.

And that is it. All races done for the year. I did manage to do around 70km for Run Upto Christmas, and luckily still got a medal due to donated miles, so thank you to those who do it! I also got my medal for Run Around Europe, an online mapping challenge where you run between certain points on a map, get badges, can join solo or as a team and can run around the United Kingdom and Ireland, Europe, America and Australia. Go check it out, it’s great for an additional little achievement boost!