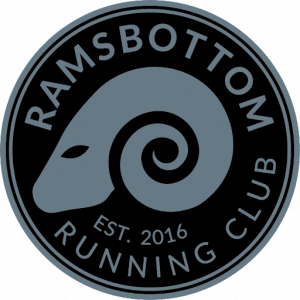 The best running club in the world – Ok, I may be slightly biased – is five years old! It started out in 2016 as an idea by Rowan to get some like-minded people together and has grown from around 20 founding members to nearly 450 in that time!

The club had a little party in Nuttall Park on Sunday and after doing Worsley Woods parkrun the day before, I didn’t expect to be running laps around the park but I always sign up to do silly things like that! It was a fantastic day, Cal loved playing with the other kids and it was wonderful to catch up with people who I didn’t see the day before.

Doing laps around the park is tough on the best of days, tougher when it’s boiling hot and you’re not in the best of fitness! Thanks to my team of Lee Entwistle, Neil McRoberts and Fiona Chick for being wonderful! 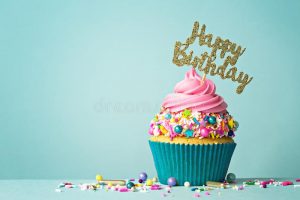 Joining the club back in 2018 was an absolute revelation for me. I’ve just re-read my post I wrote for the RRC blog back in 2019, about how running and joining the club had been a massive boost to my mental health and it’s still true today!

The club has been a huge inspiration to me over the past three years. I have very many fond memories of running wth so many people, from my very first club night to completing the virtual London Marathon with a whole team of people supporting me (thanks team!).

From trails to road running to parkruns, we’ve been through it all. Weddings, babies, getting the kids involved in the juniors and we have a right little family of people who are mad enough to say ‘6am on a Wednesday? I’ll see you there’. 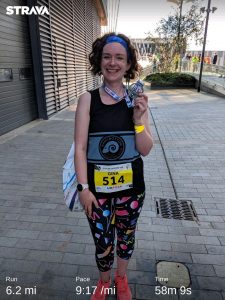 Proudly showcasing my RRC vest and a Salford 10K medal!

The lockdown really threw me for a loop, with no club nights and no running with non-family members allowed, it was weird not seeing people I’d seen at least once a week for two years.

This club is welcoming, friendly and always available for a moan about why we have to do a hill, or who organised the club night’s runs – thanks Connor for your support as always 😂 – or what shoes or watch to buy. Rowan and the team have made a safe space for people to get into running (C25K and 5Kto10K groups), or getting back into fitness after injury with a walking group. Different runs depending on if you want a sociable little bimble or to try and get a pb on a segment, there’s literally something for everyone.

Read the blog about 5 things you may not know about RRC!

If you want to see what all the fuss is about – come down to Ramsbottom Train Station at 6:50pm on a Tuesday and get involved!